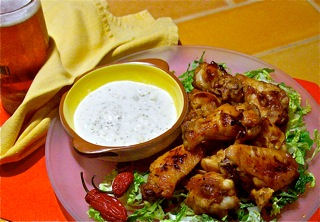 On Sunday the 20th, the whole GFF crew was up in San Francisco attending the International Fancy Food Show. Fortunately for us football fans, several of the booths and the snack bar had TVs. Periodically throughout the morning, one could hear a whoop or groan as the 49ers battled against the Falcons for the AFC Title.
Tracy was receiving text updates from her husband, and as we walked the show we were finally drawn to a bank of TVs above the snack bar just in time to see San Francisco miss a field goal, followed shortly by a fumbled ball at their one-yard line.
Heavy sighs, and a few swear words, escaped the crowd. People approached and anxiously inquired as to the score. Tension buzzed through the crowd and finally, a few minutes later, the 49ers scored what would be their winning touchdown! Talk about excitement. People where jumping up and down, whooping, shouting and dancing with happiness.
Meanwhile, on computer screens across the country, Garlic Festival’s Facebook fans wondered if a promo of  “GIANT” proportion would follow a “hometown” win.
Can the 49ers make it all the way? We hope so and you should too. Time will tell as we wait with bated breath for the Super Bowl outcome. PROMO or NO PROMO??!
In addition to waiting for that final score, we will also be preparing snacks for the Big Game! Each day this week we will share a favorite “garlicized” appetizer to spice up your football offerings…
~ Garli Glaze Hot Wings ~
This is a winner!
Pat dry and toss the desired number of wings with any hot sauce (such as Tobasco) and bake at 350º on an oiled cookie sheet or parchment paper until nearly done. Remove, drain & cool slightly. Toss with Garli Glaze to coat evenly & return to the oven & finish cooking until tender & slightly caramelized.
Previous Post
Next Post
Our Garlic Festival Blog is a great resource for all things garlic.  Here you can learn about the health benefits of garlic, some great garlic recipes for healthy eating, how to grow your own garlic and updates of garlicky events in your area.  Enjoy!

BE A PART OF THE GARLIC GANG!